Posted on December 17, 2010 by readingodysseyauthor

– Weekly dialogue between historians Paul Cartledge (PC) and James Romm (JR)
See below for the second dialogue (and check back here each week). First dialogue is here.

– Arrian’s Alexander the Great – In a New Voice
Free evening conference/reception in New York City at the NYU Center for Ancient Studies Thursday, Feb 10, 2011 at 6pm. Cohosted by the Reading Odyssey, Inc.

Did Alexander take part in a plot to murder his father?

JR: Paul, it’s surprising to me how many historians in recent years have expressed suspicions that Alexander the Great was guilty of conspiracy to commit patricide. The stabbing of Alexander’s father Philip in 336 B.C. was done by Pausanias, a resentful courtier and jilted lover, but he may of course have been put up to the job by others, and he was killed before he could be questioned. In antiquity there were rumors that Olympias, Philip’s third wife, had set the assassination plot in motion, but barely a whisper about Alexander’s involvement. Certainly there has never been any evidence to implicate Alexander, so modern suspicions are pure speculation, aren’t they? Or rather, inferences based on what historians assume about Alexander’s character and motives? PC: Jamie, it does look surprising at first sight, I agree. But let me put to you the following scenario, and I’d ask you to consider it from the point of view of the Roman lawyers’ question ‘cui bono?’ At the time of Philip’s assassination he had already begun his Asiatic campaign – the advance bridgehead force was already ensconced in Asia Minor (northwestern Turkey today). But where was Alexander? Not with that bridgehead force. Nor did Philip have any plans for Alexander to join it. He was going to leave his son and heir behind in Macedonia, as he had done once before, as Regent of his by now very extensive Greek kingdom. 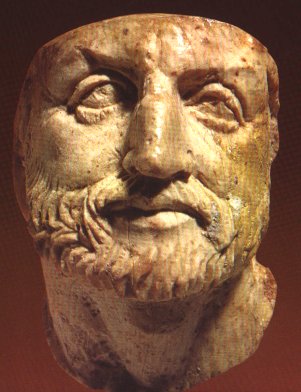 JR:  But is it fair to indict a man for murder simply because he stood to gain by the death of the victim?  On that reasoning, we could equally well accuse the Persian king Darius III (as Alexander indeed did), or any one of a few thousand Athenians.  Ancient writers were certainly willing to charge dynastic rivals with murder on slim evidence — certainly the Romans did this every time a member of the Julio-Claudian family died — but it is interesting that none of them charged Alexander with patricide.

PC: You are quite right that there has never been any good positive historical evidence to implicate Alexander in the assassination, so that modern suspicions must be pure (or rather impure) speculation. But I suggest that such speculation is at least well informed speculation, based as it is both – as above – on the known prior circumstances of Macedonian dynastic
politics (the 390s were an especially bloody passage for Macedonian royalty …) and then also, as you say, on inferences based on what historians assume about Alexander’s character and motives. For if anything seems to me to be a likely inference from those, it is that Alexander will not have been well pleased to have been left out of the Asiatic campaign altogether. Which is where my Roman lawyer’s question comes in. Cui Bono? means literally ‘for whom [is it/was it/will it be] a good thing [advantageous]’? In other words, in this particular case (pun intended), to whose advantage above all others would it have been to have Philip assassinated? Answer: Alexander. That’s not the same, anything like, as saying that he was- or ‘must have been’ – guilty of putting Pausanias up to it. But it is the same as saying that, in consequentialist terms, Alexander had very good reasons to be not at all unhappy with the outcome. JR:  I see your point, but wouldn’t it also have been to Alexander’s advantage to let Philip go ahead and invade Asia, on the assumption that a greatly enlarged empire would pass to him in the end?  After all, he was Philip’s son and heir, and Philip couldn’t live forever.  Indeed, Alexander might have figured that some Persian cavalryman would finish his father off and do the job for him, if we assume that he even wanted the job done.   PC:  Well, Alexander was certainly Philip’s oldest legitimate son, but the year before, in 337, he had taken as his seventh (sic) and last consort a noble Macedonian Greek woman, from a family that was by no means on good terms with Alexander, and with whom he was planning to have a son, the first of his sons who would be all-Macedonian (Alexander’s mother Olympias was Greek but not a Macedonian). This marriage had caused Alexander great grief, and he had behaved very badly indeed over it – with surely the at least tacit approval of his mother, who had long been estranged from Philip and who knew all about the murderous nature of Macedonian dynastic politics. For if Philip’s new wife were to bear him a healthy son – as she soon did – and that son were to grow to maturity before Philip’s death, Alexander would without question have been bypassed for the succession to the Macedonian throne, and Olympias’s role in life and probably also her life would have been abruptly terminated. JR: OK, I’m satisfied that Alexander had a motive, but let’s talk means for a moment.  The assassin who struck Philip down was a guardsman named Pausanias, supposedly acting out of jealousy — he was formerly Philip’s lover, since jilted — and injured pride.  Why would Alexander use an agent to do the deed, someone who might rat the conspirators out, or botch the job, or blab afterward under torture? Pausanias was conveniently killed by security forces as he tied to make his escape from the scene of the assassination; but would Alexander have risked that something might go wrong and his plot would be uncovered?  Couldn’t he have done the murder in a more risk-free way by doing it himself — presumably he had lots of opportunities to stab or poison Philip without being detected?   PC: The killing of Pausanias immediately after the assassination does seem a trifle – er – suspicious, does it not? i.e., my suspicious mind immediately suspects that whoever put Pausanias up to it (perhaps promising him some promotion or other favour from the new boss?) also made very sure that he couldn’t blab. Poison was never a sure method – and the assassination of Philip at the celebration of the marriage of Philip and Olympias’s daughter Cleopatra (Alexander’s full sister) to Olympias’s brother was a brilliantly public, political act, almost a coup in itself. JR:  Well, I’m more inclined to give Alexander the benefit of the doubt (I would have said he’s innocent until proven guilty, but proof in this case — as in most of the Alexander matters we will be discussing — is out of the question).  I agree though there’s plenty of grounds for suspicion!